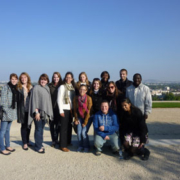 I am a freshmen at Albion College who is a part of a first year Cultural Experience Seminar. I learned many insights about the French culture and many things about French history. In addition, the family was absolutely amazing and I know I am talking for everyone who went on this trip when I say that we would not have wanted it any other way.
I learned all about Louis XIV and Marie Antoinette. I learned the history behind Versailles and St. Germain. Versailles is where Louis XIV ruled the kingdom from and it is absolutely gorgeous! The chateau and the gardens are incredible and the architecture is beyond words. Equally important St. Germain, the place where Louis XIV was born, is a city that is a mix of the old and the new. One can see Paris from it and it is a place everyone should visit when they go to France.
Furthermore, I learned that no matter where you go in France there is always something historical that corresponds with it. Coupled with this idea one can see how well the French preserve their architecture and their passion for history. Overall, my experience in France was nothing short of mind blowing and I can not wait to return and see everything I was unable to see.

Before I went to Noisey I had so many ideas of how I thought it was going to be and was worried about what was in store for me. All of my preconceived notions about this trip were blown away. Within the first five minutes of being there my worries were put to rest. It was hard to be nervous or uncomfortable when surrounded by so many wonderful people. Being in Noisey was such an eye opening experience for me, and I’m sure I can say the same for the rest of the group.
I have never lived with another family before so I really had no idea what to expect. Living with the Deny family has given me a whole new perspective on French culture. You really get an entirely different view point when it comes to cultural and family issues when you get a chance to really be a part of a family. I loved how welcoming and warm they made me feel, and I was surprised to find that many of my stereotypes were shattered instantly. Their home was open and inviting and after having breakfast laid out for me every morning I was ready to move in.
I did learn a few valuable things for my return trip to France. It’s true what they say about the French being so careful about making decisions before acting. Now I know why and how that is, returning clothing after the initial purchase is not as easy as a snap of the fingers. It was enjoyable to see all the different ways that their cultural ideals play into everyday life. Being able to see exactly what our class had been discussing in class for so long was what really made me feel closer to their culture. I hope that next time I am in France I will be able to not only have as an amazing experience as my first but also to be able to continue to understand and learn more about French culture.

I am a freshmen studying psychology at Albion College. As part of my French culture seminar class we traveled to France and stayed one week in Noisy-le-Roi and Bailly. It was a fantastic learning experience.  It pushed me outside of my comfort zone and allowed me to apply what I know about French culture to the reality of living it. I had so much fun with the family and found it so easy to relate to them. I learned a lot more about the culture, language, and myself.
This experience gave me the chance to live with a family who welcomed me into their home and into their culture. They went out of their way to make me feel comfortable and to include me in their daily activities. They showed me that even though two cultures may be completely different, they both have advantages and it’s important to embrace both. No culture is “right” and no culture is “wrong.” Each culture is a combination of past generations and the history of the country.  This is what makes the differences between cultures so unique.
Not only did I learn about French culture, I also learned a lot about the French language. My family helped me learn many new phrases and words. As the week progressed, it became easier and easier to understand. In fact, I remembered things that I had learned in previous French classes but that I didn’t realize I still knew. It was amazing to see how I could retain information I thought I’d lost and to witness how being immersed in the French language could teach me so much. I grew so comfortable with the language that I even found it hard to go back to English.
Finally, I found strength in myself that I didn’t know I had. I learned that I had the ability to adapt to other cultures and that I was open-minded. I never realized how much I would enjoy living in another culture and how much I wish I could incorporate it into my life more. When I returned to the states, I brought back a lot of new lessons. I have a higher appreciation for food, manners, and family after the trip. I am so thankful that I got this opportunity to experience France in a way that’s deeper than through a college textbook.

I quickly realized how much language influences everything in France. The inability to speak the language, as my case was, prevented me from experiencing this entirely, but I witnessed how important it language is to the French. For instance, Dr. Yewah’s bartering with the corn vender was particularly telling. He informed the group as a whole, that the key to working with North Africans begins with what he calls the rule of three. This basically means that you divide the price they offer by three and work from there. I knew that bartering in France was allowed, but I had no idea that it was to this extent, and trying to traverse this rule without speaking the language would have been impossible. This picture illustrates Dr. Yewah’s pleasure when he successfully navigated this process. I included it as a reminder that this is something that I would have had great difficulty doing and it reminds me of the incredible amount I still have left to learn.
It quickly became apparent the raw amount of wealth that France once possessed. Regardless of the current pension riots, France has a long and proud history of wealth. It is visible everywhere. In the homes, walls, and palaces the stone itself speaks of immeasurable prosperity. This was most prominent in Versailles where in even the streets themselves the stone architecture spoke volumes about the craftsmanship and time that were requirements in building such prominent buildings. The Palace itself is a true testament to the wealth of the nation, regardless of the depression that resulted from Louis the 14th’s massive expenditures. Even the modern buildings attempt to replicate the same building techniques, in that the French expend a large sum to produce buildings that are similarly grandiose. It’s interesting for me to note that as a child these facts escaped me, though I walked down the same streets and saw the same things.
I gained incredible insights into the workings of a French family. My family, though a little different, followed many of the French privacy codes. For instance, the blinds and shutters would always be closed, as would most doors including the door leading into the kitchen. In the United States it is typically rare to even have a door separating the kitchen from the rest of the house. However, many aspects of the French home life were different. These probably arose to the pragmatic truth that having six children changes things. I found myself more often than not left to my own devices, something that I thoroughly enjoyed since it allowed me to travel around the town whenever I liked. It granted me independence, something that I greatly appreciated.
I gained an appreciation for the history. The influence of the history on the culture itself was impressive. This was easily seen during the impressionist tour. The difference between the artist recreation at the time and the present was surprising little, which speaks to the French respect for the past. The addition of a few outlying structures and the growth of trees appeared, in many instances, to be the only change. I also noticed this respect in the city itself, not only in maintaining these grand buildings but the fact that they are still used was mind-blowing. The 16th century château turned mental health hospital emphasizes this truth tremendously. I gained an immense appreciation and insight into the history of France, since it is still present today.